Alert the Pentagon! Call Homeland security! If home is where the heart is, then sister you better pack it up and move because nobody is safe in this week’s wide world of comics! The Avengers attack the X-Men's scenic island of Utopia by land, air and sea while flying monkeys are bloodying up the neighborhood in No Place Like Home, and as if things weren't bad enough, after months of roaming the streets and battling walkers, Rick finally finds a zombie-free place to call home only to learn there is another threat on the horizon. Momma was right, you can never go home again, nor would you want to after this week's Paranormal Pop Comics Rundown: 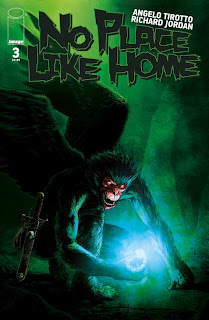 No Place Like Home #3
Image
Written by Angelo Tirotto; Art by Richard Jordan

As if being hit by a deadly tornado weren’t enough, now there’s some crazy animal on the loose killing folks. I’d say we weren’t in Kansas anymore Dorothy but now it looks as if yes, we’ve got a flying monkey on our hands and he’s pretty handy with a knife. Dee and Lizzie find out some interesting facts about the past on a rainy night while digging up Dee’s dead parents at gun point by an unkempt, chatty drunkard. Just before the big revelation, the flying monkey comes back with his pointy knife and threatens to kill them all. Too bad flying monkeys don’t melt in the rain like some screechy witches I know.

If the comics world had a prom, AVX would be both the King, Queen and Chaperone it’s just that freakin’ popular. Ding, ding! It’s round two of the battle of the year between the assembled Avengers and the super touchy X-Men mutants. Just because Cyclops has a Vertigo/Hitchcock-type crush on potential Phoenix vessel Hope, doesn’t mean that half the Earth’s heroes should kill each other off the coast of San Francisco. All this civil war begs the question, why can’t we all just get along and focus on the giant bird shaped fireball flying in from space instead? 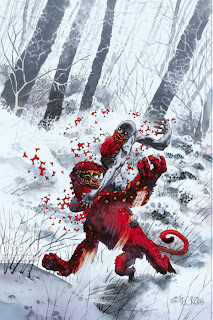 If the popular sport of MMA fighting had a monster battle category, this would be the Pay Per View fight of the year, the Wendigo vs. the Jaguar God. In one corner is the anorexic looking albino with the lanky arms and more lives than a stray cat, fighting returning champ, the werewolf red monster with the unfortunate flaw of harboring the heart of an innocent human man. B.P.R.D.’s trackers search frantically to help rescue the man trapped within the wolf but before they can find him, the monsters fatefully meet in the woods and battle to the death. There aren’t many true deaths in comics these days so when the book came to the last panel, I looked longingly out the window and learned that even I too could learn to love a monster.

Rick and his gang need a night off. For weeks they’ve been hunting and fighting and searching in vain for a warm bed to sleep in and a safe place to call home. In this conclusion of ‘A Larger World,’ Rick and company finally feel like they’ve found a home to hang their hats at the Hilltop compound but security, shelter and food don’t come without a price. At last able to accept his role as leader, Rick does some slick wheeling and dealing with the community’s big boss to which he makes a deal that he hopes will help secure a brighter future for his road weary group. I say a weekend bender at the community bar with friends would have the same effect, but to each his own. 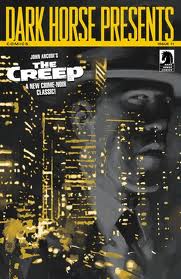 Mike Richardson has put together some of the most exciting creator-owned work in the market today in Dark Horse Presents #11 released 4/18.

The table of contents in this jam packed comics anthology supreme includes the exciting premiere of Francesco Francavilla's pulp-noir hero the Black Beetle as he sticks it to some treasure hungry Germans in “Night Shift” followed by a run in with the saucy, gun wielding Cal McDonald in Steve Niles’s Criminal Macabre and a look into the life of a grieving mother as she reaches out to a childhood friend turned P.I. after her son commits suicide in John Arcudi's The Creep.

The volume also includes Frank Barbiere and Luke Radl’s The White Suits, “meet the killers known as the White Suits, who have left their bloody fingerprints throughout modern history. When a young girl encounters one of the Suits during a mob deal gone wrong, she is forced to make a decision that will change her life forever--or end it!”
Share
‹
›
Home
View web version