Paranormal May The 4th: 'Star Wars' meets the unexplained

Star Wars nerds, rejoice! Our favorite fan made holiday is upon us: May the 4th. While you may have thought that the Star Wars universe was under the sci-fi/fantasy genre, you'd be mistaken; it's paranormal.

Need proof? Prepare to have your minds blown like Leia's home planet of Alderaan.

Chewbacca is a Wookie from the forested planet of Kashyyyk. Extremely tall and covered in fur, this forest dwelling first mate sounds like the Sasquatch that is native to the Pacific Northwest. 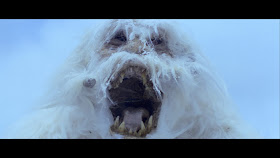 Legend has it that if you see a Yeti, a mountain dwelling Himalayan relative of the Squatch, you’ll die/be killed. Sounds vaguely like ice planet Hoth’s natural predator, the Wampa. 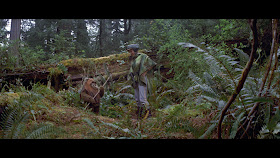 Then we have the Ewoks, strong and hairy little humanoids much like the mystical forest strolling, song whistling Duendes of Latin American folklore.

Moving from the forests and mountains, let’s take a look into space. The Star Wars universe is full of aliens, they even include the stereotypical little green man. No, the other green guy, with his big dark eyes and oval shaped head ... Rodian bounty hunter, Greedo. 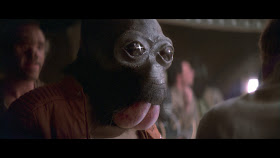 Step inside the Mos Eisley Cantina and you'll be surrounded by a bevy of different alien creatures, from the bartenders to the band, just be careful ... some of them don't take kindly to humans. 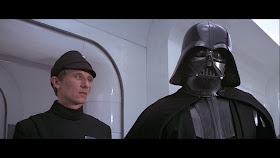 We’re even provided with a mysterious man in black. Yes, the one and only Dark Lord of the Sith, Darth Vader. 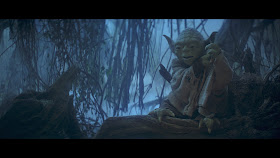 Yoda, everyone's favorite 900 year-old-Jedi, is as wise as he is mischievous. The leprechauns of Ireland are also quite fond of mischief, and while they spend all their time making shoes, Yoda spends his making Jedi. Both also enjoy the color green. 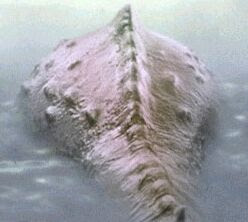 Dagobah, the swamp-like home to Master Yoda, also has it's own version of the Loch Ness monster inhabiting its murky swamps, called the dragonsnake. 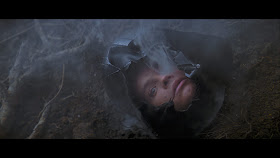 While on Dagobah, Luke encounters his own doppelgänger (a paranormal double of a living person) in a cave that is strong with the dark side of the Force. According to Germanic mythology, seeing your doppelgänger is an omen of bad luck and death. Foreshadowy. 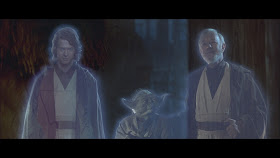 Finally, the paranormal poster child is our ghost; Obi-Wan Kenobi. After sacrificing himself in a battle against Darth Vader, Obi-Wan’s Midichlorians (or Ectoplasm) allow him to manifest as a full bodied apparition in order to help Luke become a Jedi and defeat the Sith Lord.